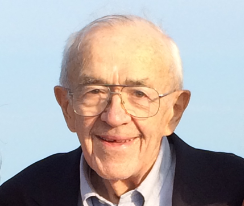 Thomas Vincent Sullivan, 92, formerly of Malvern Rd in Stamford, died Monday, February 22 at his daughter’s home, surrounded by family. Born April 5, 1928 in Providence to Catherine T. (Lyons) and John S. Sullivan, he grew up in the Smith Hill section of the city.

Following in the footsteps of his father and his two brothers before him, he served in the US Army from 1946 -1948 as a postal clerk, Technician Fourth Grade and was stationed on Shemya Island in the Aleutians.

A patent attorney, he initially worked for American Cyanamid Co., then General Foods Corp., where he helped bring to market some of the most iconic brand names in the American kitchen at the time – StoveTop stuffing, CoolWhip, Maxwell House coffee, Jell-O and Pop Rocks candy, to name just a few.

Upon his retirement, he volunteered with the American Red Cross, completed an art history program at University of Connecticut and traveled throughout the US and Europe to visit family and friends. He threw himself into the lives of his grandchildren and did not miss a birthday, game, performance, graduation or sacrament, setting a wonderful example of love and generosity.

He retained his optimism and faith, persevering until the end. A devoted family man, he had a repertoire of stories which he never tired of telling: growing up in the Depression, his time in the Army or his experiences in college and law school. He could hold forth on any number of topics such as current events or religion, but most enjoyed spending time in conversation with whomever he was speaking with on whatever subject interested them.

He was a faithful parishioner of St. Cecilia for over 60 years, including many years as a lector and member of the Resurrection Guild. He was a longtime member of the Knights of Columbus and the Stamford Senior Men’s Association.

He was predeceased by his wife of 36 years, Sheila Elizabeth Fay, and his siblings, John S., Edward T., J. Francis and Mary C. (Connolly).

A Memorial Tree was planted for Thomas
We are deeply sorry for your loss ~ the staff at Thomas M. Gallagher Funeral Home
Join in honoring their life - plant a memorial tree

Share Your Memory of
Thomas
Upload Your Memory View All Memories
Be the first to upload a memory!
Share A Memory
Plant a Tree