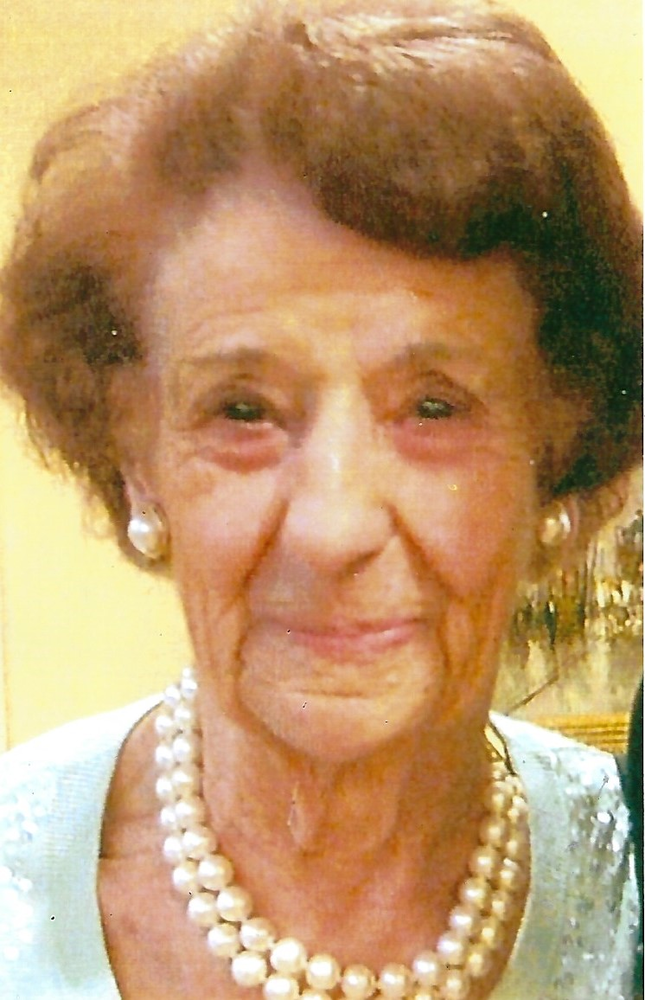 Martha Tamburri Salvatore entered into eternal rest surrounded by her family on February 11, 2021, at the age of 102. Born May 28, 1918, in Stamford, Connecticut, to Dominick and Margaret LiVolsi Tamburri, Mrs. Salvatore was a lifelong Stamford resident.

Mrs. Salvatore graduated from Stamford High School in 1934, two years ahead of schedule, at the age of 16. Her image is immortalized in SHS lore as the young girl in front of the typewriter in the famous mural painted on the wall in 1934. After graduation, she worked as an assistant to the president of the Community Chest (predecessor of the United Way), an organization dedicated to charitable giving. Later, she served as the Office Manager for Accurate Tool & Die, the business she and her husband founded.

Mrs. Salvatore was a founding member of the Blue Moon Club, a true Stamford gem, a group established by twelve teenage girls who continued to get together throughout their lives. She was the last surviving member of this group of lifelong friends.

Mrs. Salvatore met her beloved husband, Carmine "Sleepy" Salvatore, while she was still in high school, and they had their first date at her senior prom. They married in 1939, started a family in 1941, and shared 68 wonderful years of marriage together as partners and soulmates. The two would often say that the secret to a happy marriage is not 50/50 but 100/100.

Mrs. Salvatore was often doing the work behind the scenes in support of her husband's volunteer efforts in numerous sports and civic organizations, such as Senior Babe Ruth League, the Stamford Red Cross Board of Directors, and St. Joseph’s Hospital Board of Directors. As a voracious reader and a stickler for grammar, she was well suited to write his speeches.

A member of "the Greatest Generation" who grew up in the Depression era, she had strong beliefs in God, country, education, and especially family. This was on full display just about every weekend, when she enjoyed hosting her children, grandchildren and great-grandchildren for Sunday afternoon dinners.

Affectionately known within the family as "Mama", she was a pillar of strength and the rock of her family, for which her knowledge and perspective were something to behold. Never rattled nor overwhelmed, she embodied the determination and grit of her era to overcome life's challenges, most notably nurturing and supporting her husband Carmine for the last 29 years of his life during which he was paralyzed after suffering a stroke. With their shared determination, they continued to live life to the fullest, spending winters in Deerfield Beach, Florida, and summers at the beach in Rhode Island where they loved hosting friends and family.

Mama was a "young" grandmother who enjoyed swimming and playing golf as a member of the Sterling Farms Golf League. As a youngster, she developed an affinity for all sports, particularly football, when she watched her uncles star for local teams. She loved watching football on Sundays with her husband, and was most happy watching her children, grandchildren and great grandchildren play sports.

She is survived by her children Ronald (Joanne), Allen, Martha "Cookie" Bria, Bennett (Laura), and Jeffrey (Susan), along with 12 grandchildren and 26 great grandchildren.

The family would like to give special thanks to her dedicated and loving caregivers, Luz Ospina, Blanca Mendez, Erika Roman and Frecia Bajaña, who gave her peace, comfort and care around-the-clock for the last years of her life. In addition, the family also extends its sincere appreciation to the nurses and doctors of VITAS Healthcare (Hospice) for the help and support they provided to Mrs. Salvatore and our family.   All Services will be private.

A Memorial Tree was planted for Martha
We are deeply sorry for your loss ~ the staff at Thomas M. Gallagher Funeral Home
Join in honoring their life - plant a memorial tree

Share Your Memory of
Martha
Upload Your Memory View All Memories
Be the first to upload a memory!
Share A Memory
Plant a Tree