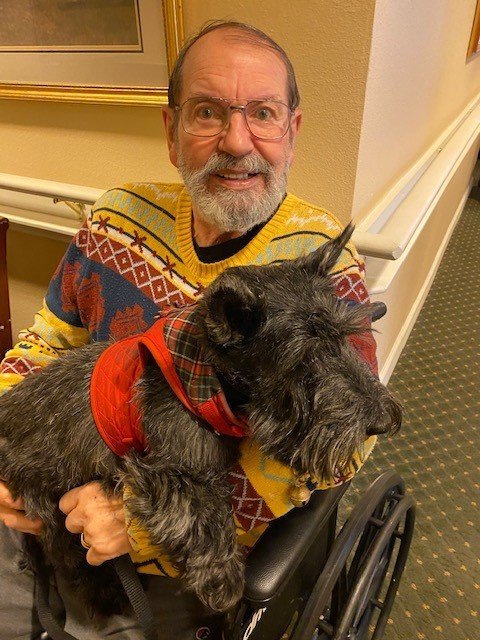 Anthony W. Hemming, age 83, died from a Covid related illness at Norwalk Hospital on January 28, 2021.  He had been living at Brookdale in Wilton and previously on Bittersweet Trail.

Tony was a 1961 graduate of the University of Miami, Florida.

He spent many of his formative years traveling back-and-forth to England, after World War II,  with his English parents before the family eventually settled in Bronxville,  New York.

There he met Mary Louise Hawthorne who became his wife. (Divorced 2001) They had a daughter, Elizabeth Ann,  their only child who passed away at age 44 in 2011.

Tony was the President of a medical diagnostics firm, Unimar, that he started along with three other partners located in Wilton Connecticut.   After selling Unimar he retired and then fulfilled his dream of owning a little shop…he and new partner opened Fido's Food Bin, a small service oriented pet food and supply business.  Years later, daughter Liz and son in law Skip, took over the business.  Pets loved coming to Fido's with their people because they always got lots of attention and treats!  To say that Tony loved animals, especially dogs, would be an understatement!

The Connecticut Humane Society and Animal Shelter was the happy recipient of many donations from Fido’s over the years.  Fido's closed on November 30, 2010.

Tony leaves behind many loving family members and friends.  A small graveside service is scheduled to take place at the Beech Grove Cemetery in Westport, MA  where Tony will join his daughter Liz, or Lil bit as he liked to call her, on Thursday, February 4, 2021.

A Memorial Tree was planted for Anthony
We are deeply sorry for your loss ~ the staff at Thomas M. Gallagher Funeral Home
Join in honoring their life - plant a memorial tree

Share Your Memory of
Anthony
Upload Your Memory View All Memories
Be the first to upload a memory!
Share A Memory
Plant a Tree