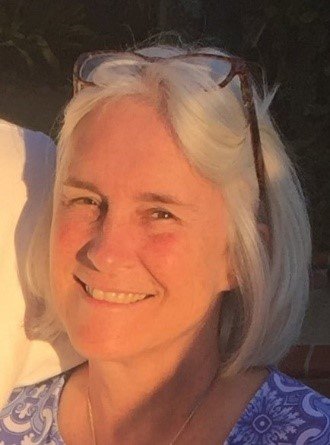 Lucia Elizabeth Cook, age 64, a long-time resident of Stamford, died peacefully at home on Thursday, August 06, 2020, after a valiant battle with cancer and surrounded by her devoted family. Lucia was born May 24, 1956, in Kirkwood, Missouri, the daughter of Thomas William and Ruth (Doege) Stobbs. She graduated from Kirkwood High School and subsequently earned a degree from the University of Wisconsin, Madison.

After college, Lucia moved to Santa Monica, California, where she worked as a consultant in Human Resources and met her future husband (“It was in a beach volleyball game and I liked the fact that he didn’t hog the ball!”). John and Lucia married in September, 1982, and settled in southern California where Lucia worked as a consultant and as a high school counselor.

They moved to New York City in 1992 and on to Stamford in 1994. It was there that Lucia began her career in philanthropy both as a volunteer and eventually as the Program Manager of Literacy Volunteers at Family Centers. She played an integral role in transitioning the program in the acquisition with Family Centers. As a tutor and administrator her deep commitment, positive outlook, and belief in the potential of others earned her the respect of both her students and colleagues. Her commitment to the Stamford community was immeasurable and she was deeply passionate about providing literacy support to all. After her retirement in early 2018, LVFC created the Compassionate Leadership Award in her honor. At the awards night event, students and colleagues composed heartfelt speeches to pay tribute to her commitment and mentorship throughout the years.

Lucia is survived by her husband John of Stamford; her daughter Cindy Cook of Stamford and recently of Eindhoven, The Netherlands; her stepdaughter Courtney (Cook) Foley and husband John of Montclair, New Jersey and their daughters Elena and Brynn; her stepson Joshua Cook, his wife Anna, and their daughters Rachel and Ellie of Londonderry, New Hampshire; her stepdaughter Alyson (Cook) Khan and her son Taj of Pacific Palisades, California; her brother, Bill and his wife Sara of Kirkwood, Missouri; her brother, Paul and his wife Robin of Bullhead City, Arizona; and her sister, Georgia (Stobbs) Cucchi and her husband Michael of Kirkwood.

In addition to her beloved and devoted family, Lucia will be sorely missed by the countless lives she touched and enriched with her love and compassion, her thoughtful and generous spirit and the selfless giving of her time and many talents.

Lucia was full of life, a devoted mother and stepmother and steadfast friend. Her radiant smile, infectious laugh, sense of humor, and positive outlook will be sorely missed.

A Celebration of Life has not yet been scheduled, due to the pandemic.

Share Your Memory of
Lucia
Upload Your Memory View All Memories
Be the first to upload a memory!
Share A Memory
Plant a Tree