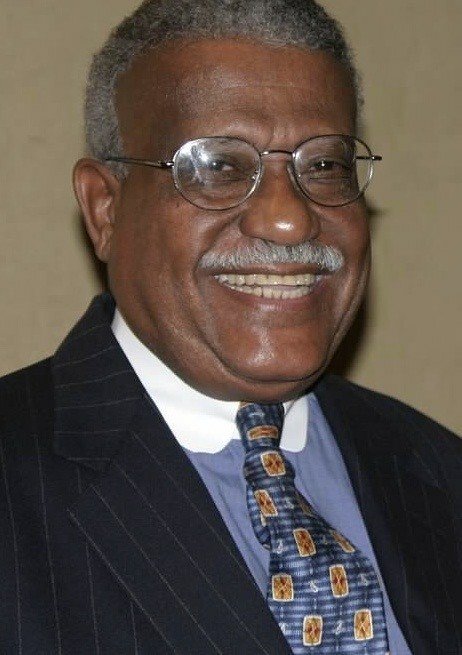 Stamford - Leroy “Lee” Terrell, 87, of Stamford, CT was at Stamford Hospital when he was called home to be with the Lord on Wednesday, July 22, 2020.  He was the loving and devoted husband of Ruby Terrell for 65 years.

Lee was born October 12, 1932 in Prescott, Arkansas, to Luvelia Madkin Terrell and Mayfield Terrell, Sr.  He grew up in North Little Rock, where he attended Jones High School and graduated in 1949.  He furthered his education and graduated in 1956 from Arkansas AM&N College, now the University of Arkansas at Pine Bluff with a degree in Business Administration.  It was in college Lee met his lovely wife. They married in 1955 and have four children, Eric, Gail, Christopher, and Scott.

He served his country honorably, joining the U.S. Army in 1951 and was assigned to the 373rd Armored Infantry Battalion in Germany. He received an honorable discharge in 1953 and returned to Arkansas where he enrolled in college. Upon graduation he was quickly hired at International Business Machines (IBM) where he worked for over three decades, before getting involved in Social Services and Non-Profit organizations.  Lee was a dedicated IBM’er who started his career in 1956 in Seattle, Washington. Having worked in various Sales, Marketing, Administration, and Human Resources management and leadership roles with IBM he relocated from Seattle to California, and then settled in Connecticut in 1974.  He retired from IBM in 1992.  Lee was passionate about his community service and civic responsibilities.  He worked as Director of HR for Northside Center for Child Development in New York, and CTE Inc, in Stamford.  Lee also volunteered his time to many organizations including the National Urban League Black Executive Exchange Program, the U.S. Department of Labor Youth Motivation Task Force, the Urban League of Southwestern Connecticut, 100 Black Men, Stamford Fair Housing Commission, and was the Chair for the Personnel Commission for the City of Stamford for 3 years.  He also served on various Boards including Shelter for the Homeless-Pacific House in Stamford, and the Yerwood Center in Stamford.

Lee enjoyed and lived life to the fullest. He and his wife, Ruby, enjoyed travelling around the world and made wonderful memories together.  He was a long-time University of Arkansas Razorback fan.  He is a member of Alpha Phi Alpha Fraternity Inc. He was also a Guardsmen in the Connecticut chapter. He made lasting friendships through his different affiliations. He loved playing poker and tennis.  In addition, Lee enjoyed gardening and was also an avid cook. He frequently experimented with new recipes and looked forward to grilling on his char-coal Weber grill.  He cherished time with family and friends and hosted many barbecues, dinners and holiday celebrations. Friends could stop by any time and receive a warm welcome, some good food, and a cold drink. In his spare time he could always be found watching golf and tennis matches.

He is survived by his loving family including devoted wife Ruby, children Eric Terrell of Dallas, TX, Gail (Loren) Terrell-Green of Chester, NY, Christopher (Anjani) Terrell of Stratford, CT, Scott (Simone) Terrell of Beacon Falls, CT, grandchildren, Tegh, Camille, Carter and Rohan. In addition he leaves behind his sister Juanita Rose, nephews, and nieces. He was preceded by his brothers Mayfield Jr. and Billy Terrell.

Lee will be sorely missed but will live forever in our hearts.  Funeral arrangements have been entrusted to Thomas Gallagher Funeral Home in Stamford, CT.  There is a wake scheduled for Wednesday, August 5, 2020 from 4:00 - 7:00 p.m. ET, at Thomas Gallagher Funeral Home, 453 Shippan Ave., Stamford, CT 06902 (203)-359-9999. Private funeral services to take place on Thursday, August 6, 2020 at 10:00 a.m. ET, also at Thomas Gallagher Funeral Home.  Interment to follow immediately after the funeral service.  In lieu of flowers a Memorial donation may be made to Pacific House, 137 Henry Street, Suite 205, Stamford, CT 06902, pacifichouse.org.  If you would like to leave a condolence message online or share memories with the family please visit the family guestbook at www.gallagherfuneralhome.com.  Due to current COVID-19 circumstances, and for the safety of those the family cares so much about, a Celebration of Life for Lee will be scheduled at a later date.

Our sincere thanks and gratitude to family and friends for your expressions of kindness and sympathy.

Share Your Memory of
Leroy
Upload Your Memory View All Memories
Be the first to upload a memory!
Share A Memory
Send Flowers