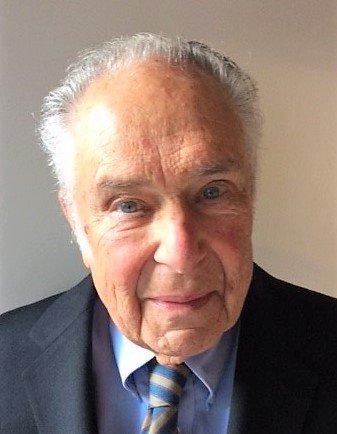 Lester Sharlach, 90, a lifelong Stamford resident, passed away Thursday, July 16th, after a brief illness, just one week before his 91st birthday. Born at Stamford Hospital in 1929, Lester lived with his parents on Stamford’s East Side and attended Rogers School before graduating from Stamford High School in 1947 and joining the Naval Reserve. He spent his entire career as a local merchant running Roven’s Curtain Shops in Stamford, Greenwich, Wilton and Westport before retiring in 1984. In 1972, he was one of the co-founders of Liberty National Bank in Stamford which was later acquired by Connecticut Bank and Trust (now part of Bank of America.) In his retirement, Lester became increasingly active in the community. An avid collector, he created a unique assemblage of Stamford postcards and historical ephemera which he often shared in presentations to local groups and senior centers. Lester and his wife Elaine were co-founders of the Southwestern Connecticut Chapter of Parents and Friends of Lesbians and Gays (PFLAG) where they helped many parents through what was—at that time—often a very difficult period of coping with the news that a child was a gay. Along with his wife, he was also active with the Triangle Community Center in Norwalk, which honored them in 2017 for “35 years of making Fairfield Country a better place for the LGBT community.” In conjunction, Stamford Mayor David R. Martin proclaimed March 11, 2017 as “Elaine & Lester Sharlach Day” to recognize the couple’s efforts in the community and the reception area at the Triangle Community Center in Norwalk was named in their honor. Lester was a founding member of Jewish Historical Society of Fairfield County (JHS) in 1984, and over the past 36 years served as mover, all-around handyman and president of the organization. In 2017 he was awarded the JHS Pioneer Award in recognition of his efforts. For the past several years, Lester had been leading the creation of a Society exhibition on local Stamford merchants, “Remembering the Family Store” which is being made into a documentary film that JHS expects to complete later this year. Lester was also well known for his regular visits to the Jewish Home for the Elderly and Waveny Center each week with his wife Elaine and their certified therapy dog Harry, bringing cheer and companionship to the residents, until the COVID-19 crisis forced them to stop. He celebrated his 69th wedding anniversary at the start of this month at home with his wife and family members. Lester and Elaine most recently lived in the Turn of River area of Stamford on a tract that was formerly Geriak’s Dairy Farm, the place they celebrated Elaine’s Sweet 16 together in 1948. In addition to his wife, he is survived by sons Jeffrey and Brian Sharlach, his daughter Debra Sharlach Rosner; three grandchildren, Molly, Benjamin and Jonah; two great-grandchildren, Nathaniel and Samuel; his beloved canine companion, Harry, and a community of friends and admirers. A private graveside burial was held by the family and plans will be announced for a memorial service at a later date. In lieu of flowers, the family has suggested donations may be made in his memory to the Food Bank of Lower Fairfield Country, The Triangle Community Center (Norwalk), the Jewish Historical Society of Fairfield County, or the charitable organization of your choice. Arrangements were handled by Thomas M. Gallagher Funeral Home (203)-359-9999. For more information, please visit www.

Share Your Memory of
Lester
Upload Your Memory View All Memories
Be the first to upload a memory!
Share A Memory
Plant a Tree