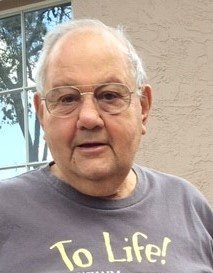 Ronald S. Schacht, 86, passed away on September 1, 2019 after a short illness, in Boca Raton, FL.  He had lived in Stamford, CT and Boca Raton, FL.  Mr. Schacht was predeceased by his wife of 40 years, Natalie Goldman Schacht.  He is survived by his three daughters, Patti Ellen Schacht of Waltham, MA, Bonnie Anne Schacht Johnson (and her husband, David Johnson) of Stamford, CT and Cindy Joy Schacht of Norwalk, CT.  He is also survived by his sister, Barbara Ann Horowitz (and her husband, Hal Horowitz) of West  Hills, California.  In addition, he is survived by his long term companion, Norma Domesick Kraut, her two daughters, Elissa Kraut Klapper (and her husband, Philip Klapper) of Stamford, CT and Claudia Kraut Rimerman of Stamford, CT, and her brother, Stephen Domesick (and his wife, Marsha Domesick) of Lake Worth, FL.  Mr. Schacht leaves eight grandchildren (Cory, Jaime and Dana Johnson, Hannah and Sally Klapper, and Herbie, EJ and Emma Rimerman) and many nieces and nephews.

At the time of his demise, Mr. Schacht was a retired partner with Proskauer Rose, LLP., where he practiced law for 33 years and served on Proskauer’s Executive Committee and as Chair of its Tax Department.  While in practice, Mr. Schacht represented numerous individuals, domestic and international corporations, tax-exempt organizations, hospitals and sports leagues.  He also practiced before the Internal Revenue Service, where he started his career as an employee for five years in the Regional Counsel’s Office in New York City.  Mr. Schacht was known as a pragmatic tax attorney and one who could simplify the Internal Revenue Code for his colleagues and clients.  He was well respected by his partners and employees at all levels.

He had also been an Adjunct Professor at New York University School of Law and had lectured for the Practicing Law Institute and to other organizations.

Mr. Schacht traveled extensively and was proud that he had visited all 50 states and more than 75 countries.  He was a voracious theater goer and attended theaters on and off broadway and in many regional locations.

He received a B.S. degree from the University of Connecticut (and was an avid fan of its basketball teams) and received an LL.B and LL.M (in Taxation) from New York University School of Law.

The funeral will be held at Congregation Agudath Sholom 301 Strawberry Hill Ave. in Stamford, Wednesday September 4, 2019 at 10am.  Interment will be at the Congregation Agudath Sholom cemetery immediately following the funeral.   Shiva will be observed at the home of Bonnie and David Johnson 27 Winesap Rd in Stamford on Wednesday immediately following the services until 9:00 pm, Thursday from 5:00-9:00 pm and Saturday 8:15-10:00 pm.   Evening services will take place Wednesday and Thursday night at 7:00 at the Johnson home.

In lieu of flowers donations may be made in his name to Trustbridge Hospice 5300 East Ave.  West Plam Beach, FL  33407

Arrangements are under the direction of Thomas M. Gallagher Funeral Home (203)-359-9999. To send on-line condolences to the family please visit www.gallagherfuneralhome.com

Shiva will be held at the Johnson Residence 27 Winesap Rd Stamford, CT

Share Your Memory of
Ronald
Upload Your Memory View All Memories
Be the first to upload a memory!
Share A Memory
Plant a Tree