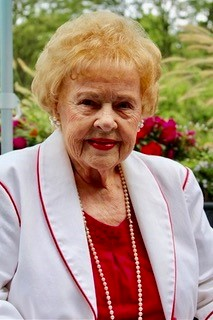 Ilene Hotchiss Blechner of Greenwich, CT passed away Thursday, August 15th at the Greenwich Hospital, surrounded by her loving family.

Born September 3rd, 1924 she was the only daughter of the late Pauline Risman Hotchkiss and Homer Hotchkiss. Her mother was from Czechoslovakia and her father from New Britain, CT. The Hotchkiss family dates back to the 1600’s and through her late father Homer, Ilene became a Daughter of The American Revolution. Ilene’s mother, Pauline was widowed at a very young age and eventually remarried a wonderful man, Peter Scursso, a  professional chef. Pete was the only Grandfather the Blechner boys ever knew.

As a child she first lived in Pemberwick until the seventh grade when the family moved to the New Lebanon section of Byram.

Ilene attended and graduated from the Greenwich High School in 1942 with secretarial skills. Later she became the secretary at the New Lebanon School.

Ilene met Alfred Otto Blechner when she was fourteen and they married when she was eighteen. They were engaged 1942 just before Alfred left for the Air Force. After the war,1945 they married and were married for 45 years. Peter and Pauline (Hotchkiss) Scursso purchased a three-family house on Church Street West in Byram; the family home at which the family still resides.

Ilene was a Town of Greenwich employee for most of her adult life. She started in Boats and Harbors but is most known for her years of dedication to the Department of Vital Statistics as the Assistant Registrar. Most likely, Ilene’s signature is at the bottom of either your marriage and/or birth certificate(s); for most Greenwich residents.

Services will be held at the St. Paul’s Lutheran Church, 286 Delavan Avenue, Byram, CT on Tuesday, August 20th, 2019 at 10am. Immediately following the service burial at Greenwood Union Cemetery, Rye, NY. Flowers can be delivered to St.Paul’s Church on Tuesday morning prior to the service.

There are no calling Hours

Flowers in memory of Ilene may be delivered to the Church Tuesday prior to services.

Share Your Memory of
Ilene
Upload Your Memory View All Memories
Be the first to upload a memory!
Share A Memory
Plant a Tree