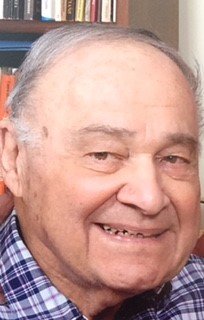 Irwin J. Miller died on Saturday, July 6, 2019, in Norwalk, Connecticut.  He was born on February 19, 1926, in Brooklyn, New York, to Bertha and Philip Miller. Irwin and his wife of 71 years, Vivian Berger Miller, moved to Stamford, Connecticut in 1960 and raised their family there.

Irwin graduated from Erasmus High School in Brooklyn, New York, in 1943.  In 1944 during World War II, after pestering the draft board, his number finally came up and he was drafted into the Navy. He was stationed in the Pacific where he was a Signalman on the USS Kershaw, and discharged in May 1946. He was an owner of Gilbert E. Miller Associates, a manufacturer’s sales rep of audio equipment. Being a historian at heart, Irwin was a founding member and first President of the Jewish Historical Society of Stamford*, started in 1982.  He took tour groups into New York City and Newport, Rhode Island. He also co-wrote The Jewish Communities of Greater Stamford with Linda Baulsir published in 2002. His passions were American Jewish history, genealogy, and the Brooklyn Dodgers.

Funeral services will be privately held.  A Memorial Service will take place at 3:45 p.m. Monday, July 8, at the Gallagher Funeral Home at 453 Shippan Avenue, Stamford.

Shiva will be held from 4:00 – 8:00 p.m. Tuesday, July 9, at Barbara and Elon Mileikowsky’s apartment at 1 Strawberry Hill Avenue, Apt. 4E, Stamford.  Sign in with the doorman for limited parking in the garage.

Share Your Memory of
Irwin
Upload Your Memory View All Memories
Be the first to upload a memory!
Share A Memory
Plant a Tree