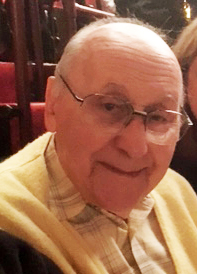 Salvatore “Sal” Colletti passed away peacefully surrounded by his loving family on June 13, at the age of 91.  Sal was born in Manhattan on January 2, 1928, to Lillian and Charles Colletti.  Sal grew up in Brooklyn and later made Stamford his life-long home with his loving wife and children.  Sal graduated from Boys High School in Brooklyn and City College in New York with Bachelor’s Degree in Business Administration and was a Certified Internal Auditor.  He worked for AMF Inc. for 28 years and retired as Director of Auditing.  Sal was an avid bowler and played in many leagues and competitions.  He also was a talented trumpet player.  In his younger years he attended Julliard School of Music and later enjoyed many years playing trumpet with the both the New Canaan and Darien Town Bands.

Sal is survived by his wife Ellen (Eleanor) Colletti.  He is also survived by his children, John Colletti and his wife Diana of Norwalk, CT and Carol Bruzzese of Stamford.  Sal had a special love and affection for his three grandchildren, Margaux, Vincent and Jonette.

Donations may be made in Sal’s memory to Abilis, 50 Glenville Street, Greenwich, CT  06831

Share Your Memory of
Salvatore
Upload Your Memory View All Memories
Be the first to upload a memory!
Share A Memory
Plant a Tree