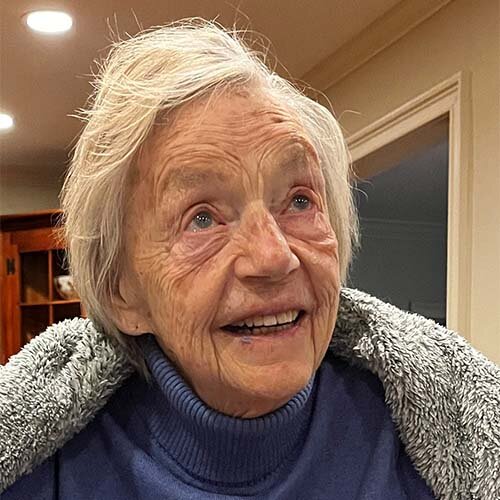 Frances “Sis” Madigan Healey, a resident of New Canaan for 56 years, died January 6th, she was 91.

In her youth, Sis found true joy swimming competitively.  When not at the Stamford Yacht Club pool, her training was often in Long Island sound--guided by the moon’s reflection--to the buoy marker and back.  Her swimming prowess led to exhibitions with Olympians and actors. Her win at the 1947 Yale Carnival in the 100 Meter Backstroke, broke the pool record and earned her a birth to the Olympic Trials in Detroit.  While she didn’t make it to London in 1948, the record at the Payne Whitney pool stood as the official Connecticut women’s backstroke record for nearly 30 years. Her closest competitor in that Yale meet, Suzanne Zimmerman, went on to win the Silver medal at the London games.

1948 was also the year Sis took up Golf.  It was at the driving range that she met her future husband, Jack Madigan. Sis and Jack were married in 1952 and joined the Woodway Country Club in 1953.  Sis’ athleticism and love of competition carried over to the golf course. In all, Sis was a 3-time Women’s Club Champion.

The Madigan’s moved to New Canaan in 1966 where Sis’s career in Real Estate began.  First with Margaret Hecker Real Estate and then with Brotherhood and Higley.  Sis’s career spanned more than 35 years.  If you bought your home from Sis, you would remember fondly the homemade Lasagna and brownies she would deliver on your move-in day.

Sis was pre-deceased by her beloved Jack in 1982.  In 1985, Sis married James R. “Jimbo” Healey.  Jim and Sis continued to reside in New Canaan while Sis continued her career until her “retirement” which never seemed to fully take hold.  Sis and Jim enjoyed traveling, being first on any dance floor and of course, golf.  Jim died in 2006.

Sis’s love for her family and friends was boundless.   Sis had a knack for knowing what was needed and what to offer at just the right time. As one longtime friend said, “I love Sis, she anticipates.”

A member of St. Aloysius Parish, Sis will miss her extended family at daily mass.  Her faith was her rock and her guide.  In the end, God brought her swiftly home.

Sis was a member of the Woodway Country Club for nearly 70 years, a member of the Women’s Westchester and Fairfield Golf Association, the New Canaan Board of Realtors, she served on the Boards of the Easter Seals of Connecticut and the Stamford Rehabilitation Center.

In Lieu of flowers, donations in Sis’s name may be made to the Robert C Leverich Scholarship Fund at Woodway Country Club or OPIN, Outreach for Pets in Need, Stamford, CT.

A Memorial Tree was planted for Frances
We are deeply sorry for your loss ~ the staff at Thomas M. Gallagher Funeral Home
Join in honoring their life - plant a memorial tree

Share Your Memory of
Frances
Upload Your Memory View All Memories
Be the first to upload a memory!
Share A Memory
Plant a Tree