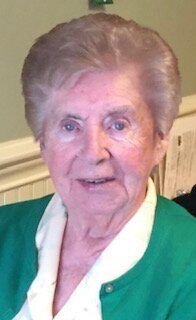 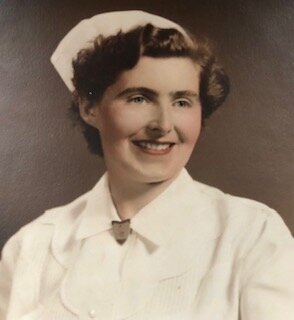 It is with heavy hearts, we share the news that our dear mother, passed into God’s Kingdom of  Heaven, of which she was most deserving, on November 5th, while surrounded by her family.

Born the 6th of February 1927, the eldest of nine siblings, to the late John Walsh and Bridget Lydon Walsh of Millpark, Claran, County Galway, Ireland.

She was predeceased by her loving husband of 36 years, John (Jack), who was taken too soon, and her siblings, Patrick (Patsy), Thomas, John Joe, Martin, Nora Walsh O’Connell, Brid Walsh Egan, and her granddaughter Tierney O’Connell. Surviving siblings are Francis Walsh of England, and James Walsh of Dublin, Ireland.

In addition, Maura is survived by her grandchildren, Cailin O’Connell, Megan O’Connell Slocum Querze (Matt), Fiona and Deirdre O’Connell, Derek and Conor Gebo, and Jack and Daniel Byrne, her great granddaughter, Bridget Querze, as well as numerous nieces and nephews in Ireland, Northern Ireland, England, Australia and the U.S.A.

Maura was a member of the first graduating class of the Presentation Secondary School in Headford, Ireland.  She earned her Registered Nursing (RN) diploma from Galway Hospital and subsequently worked at St. Kevin’s Hospital in Dublin, Ireland.  While in Dublin, it was at the Teachers National Dance Hall where she met her future husband Jack.

Maura and Jack emigrated to the United States, where she continued her nursing career at Stamford Hospital as an ICU/CCU nurse.  While working at the hospital, she earned a Bachelor’s Degree from Pace University in Pleasantville, NY.  She retired from the hospital and continued for twenty years as a private duty Nurse.

Maura was a proud U.S. citizen and equally proud of her ancient Irish heritage. She was an active member of the Stamford Ladies Ancient Order of Hibernians, where she served many offices in addition to holding various positions at the division, county and state levels including State President.  The appreciation of her leadership was evident when she was made a Lifetime member of the National Ladies Ancient Order of Hibernians in 2013.

Maura served several years as Chairperson of the Stamford Feis which promoted Irish culture and featured competitive dance, music and sports competitions.  She was honored as the Grand Marshal of the Stamford St. Patrick’s Day Parade in 1997.

As an ardent supporter of her Catholic faith, Maura was a Communicant for sixty plus years at St. Maurice Church. She served as a Eucharistic Minister and volunteered in preparing meals for the New Covenant House soup kitchen.

Our family is grateful for the exceptional and compassionate care our mother received over the past six years from her live-in caregivers Marie Maxwell and Pam Williams.  In addition, we thank the professional team of doctors and nurses on the sixth and seventh floors of the Stamford Hospital. Their care and help was immeasurable.

A funeral mass will be held at St. Maurice Church, 358 Glenbrook Road in Stamford on Thursday, November 10th at 10:30am.  Procession thereafter to Queen of Peace Cemetery at 124 Rock Rimmon Road  in Stamford.

In lieu of flowers, the family requests donations to the charity of your choice.

Share Your Memory of
Maura (Mary)
Upload Your Memory View All Memories
Be the first to upload a memory!
Share A Memory
Send Flowers
Plant a Tree