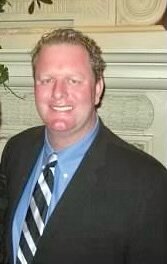 Steven Patrick Smyth who was born and raised in Stamford passed away at Stamford Hospital on the evening of October 10th where he ultimately died of complications from Sepsis.

Steve had graduated from Trinity Catholic High School in 1994 where he played both basketball and football. Steve was the starting offensive tackle for the 1993 State Championship Football Team and where he formed very strong lifelong bonds with many of the players. Steve was then fortunate enough to attend the University of Notre Dame. Not only was Notre Dame a school of deep Irish Tradition that hit home for Steve but Notre Dame was a place where even further friendships were made along with both an Undergraduate Degree as well as a Master's Degree in Finance.

Steve was very proud of his children. He was very much looking forward to continuing scuba diving lessons with Michael as well as looking at Colleges in the near future & spending quality time with his "Sweet Caroline" when possible.

In lieu of flowers the family requests that you consider donating to Michael and Caroline’s Education/College Fund...