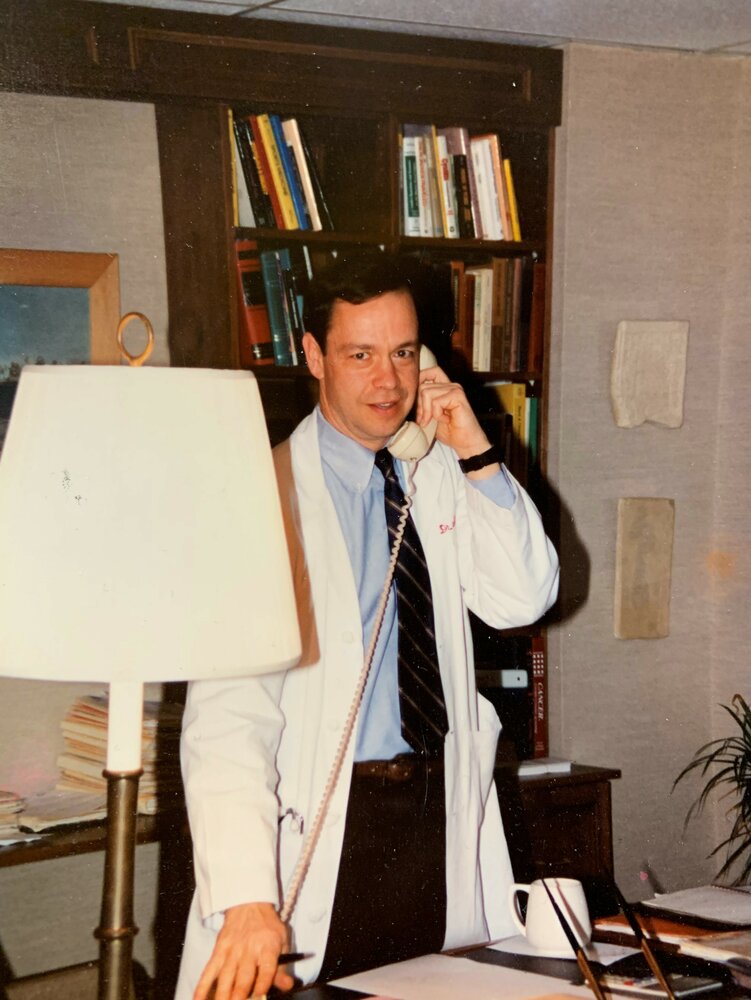 Dr. Alan I. Lebowitz, 81, of Greenwich, CT, passed away on February 9, 2022 at home surrounded by family.  Alan was truly a modern-day renaissance man who treasured the world around him and his place in it.  He embraced science, technology, music, art, and literature.  Alan also loved to make people laugh and he always tried to share his unique appreciation of the world.  His curiosity was insatiable and his humor was a driving force.

Alan enjoyed life to its fullest, maintaining his curiosity and wonder of the world throughout his life.  Whether it was mastering a new song on the piano or guitar, enjoying a NY Philharmonic performance, sailing or kayaking on Long Island Sound, practicing medicine, or even taking in the view from an airplane window, Alan was always investigating, always making new discoveries, and always finding joy and fascination in everything around him.

Alan was born on December 3, 1940 to Herman and Bertha Lebowitz in Philadelphia.  He grew up in northeast Philadelphia, attended Northeast High School, and followed his personal dream of becoming the first physician in his family.

Alan married Harriet Fisher on August 19, 1964 and cherished her and their two children, Cathy and Peter, for the rest of his life.  He was also a loving and dedicated grandfather to Zoe and Eli who greatly admired and benefitted from their grandfather’s zest for life.

Alan proudly served as a major in the US Army from 1969-1971 as a physician and hematologist, taking care of service members in Fort Bragg, North Carolina.  After North Carolina, where Alan and Harriet made lifelong friends, the family headed to Connecticut, first in Stamford and then Greenwich.

Alan practiced internal medicine and hematology in private practice in Stamford, Darien, and Greenwich for nearly 50 years.  He was also an Associate Clinical Professor of Medicine at Yale University School of Medicine where he took care of hematology patients and taught students, residents, and fellows.  He was loved by his patients and all the people who worked with him.  He was a remarkable physician who not only cared deeply about his patients but always used the full breadth of science and medicine to seek solutions to difficult medical problems in thoughtful ways.  His focus throughout his entire career was always on expanding his medical and scientific expertise to achieve excellence in providing medical care to patients with empathy and humor.

After retiring, Alan helped establish a foundation in honor of his friend and colleague at Yale. The Bernard G. Forget Hematology Scholars Program was established to support research efforts of hematology residents at Yale.

Alan will be missed by many but most intensely by his wife, Harriet, his two children, Cathy and Peter, his daughter-in-law, Elizabeth, and his grandchildren, Zoe and Eli.

Contributions in memory of Alan can be made to the Bernard G. Forget Hematology Scholars Program at Yale Cancer Center.  Gifts can be made at the following link by typing ‘Forget Fund’ in the blank:  https://tinyurl.com/ForgetFund.

A Memorial Tree was planted for Dr. Alan
We are deeply sorry for your loss ~ the staff at Thomas M. Gallagher Funeral Home
Join in honoring their life - plant a memorial tree

Share Your Memory of
Dr. Alan
Upload Your Memory View All Memories
Be the first to upload a memory!
Share A Memory
Plant a Tree