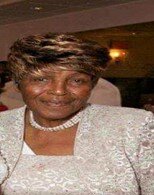 Mary Alice McMillan lived a God-fearing, faith-filled 88 years before her passing on January 23 in Stamford, CT.  She was born on April 19, 1933, in Pickens, AL.  She was the daughter of Mr. and Mrs. Butler who has preceded her in death.  Mary later moved to Andalusia, AL where she married (Fred D. Jones-deceased) and had two children Mary F. Butler-Jones and Lois E. Butler-Jones (deceased).  Mary later moved to Connecticut with her family.  Once in Connecticut Mary worked part-time and was a full-time homemaker.  Mary raised her children and the children of the community.  Mary later remarried Paul McMillan “Poppy” (deceased) and they raised their children and grandchildren.  Mary was a pillar of the community and the Mother Goose of her area.  She had an open-door policy for anyone who needed a safe haven.  She was known to all who loved her as “Gramps” or “Goose”. Mary Alice Mc. Millan has left us with her legacy of greatness.  She prayed for and with her family and was always there for those that needed her.

Share Your Memory of
Mary
Upload Your Memory View All Memories
Be the first to upload a memory!
Share A Memory
Send Flowers
Plant a Tree