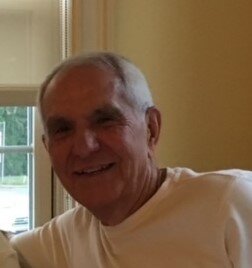 Francis (Frank) Joseph Zezima, a long-time resident of Stamford, CT before retiring to North Carolina, passed away on Monday January 24, 2022.  He was 86.

Born on February 12, 1935 in Stamford, CT, he was the son of the late Michael Zezima, Sr. and Frances Tamburri Zezima.  Frank graduated from Stamford High School in 1952 and went on to obtain his bachelor’s degree in Accounting from the University of Bridgeport.

Mr. Zezima served in the United States Army during the time of the Korean War.  After a short career in the accounting field, Frank followed his entrepreneurial spirit when he purchased DeRosa Cleaners in Stamford which he owned and operated for many years.  He was later the owner\operator of Parkway Convenience and ended his career as a Sales Representative for White Plains Linen.

He was a diehard lifelong fan of the New York Football Giants.  When he wasn’t attending a Giants game in person, he could be found yelling at the television every autumn Sunday watching his beloved Big Blue.  He cherished being able to attend and celebrate the Giants first Super Bowl victory (XXI) at the Rose Bowl with his youngest son, Greg.  He loved to workout at the gym even until his later years and of course he loved his yard where he would often been seen mowing the lawn or trimming the hedges.   Frank was also a long-time member of the Italian Center Men’s Club during his year’s living in Stamford.

Frank is survived by his two sons:  Ronald F. Zezima (Renel) of Redlands, CA and Greg J. Zezima (Kathleen) of Stamford, CT.  As well as his beloved grandchildren Steven, Melissa, Grady, Gianna and many nieces and nephews.  He is survived by his brother Donald Zezima of Stamford.  Also survived by his ex-wife of 37years; Nancy Weed Zezima.  In addition, he is survived by his loving companion of over 20 years, Mary Baran, her children Emil, Chris, Andrew and of course his beloved dog, Lucy.  The family will be eternally grateful to Mary for taking care of Frank during his last months.  He was predeceased by his oldest brother Michael Zezima, Jr. and his sister in-laws Amelia Zezima and Lucia Zezima.

In Lieu of flowers, the family requests donations be made to Make-A-Wish America

Visitation will be held on Wednesday, February 2, 2022 from 4-7 pm at Thomas M. Gallagher Funeral Home 104 Myrtle Ave Stamford, CT (203)-359-9999.  A Mass of Christian Burial will be held at 10 am on Thursday, February 3, 2022 at St Leo Parish 24 Roxbury Rd Stamford, CT.  The Interment will follow at St John Cemetery Darien, CT.  To send condolences to the Zezima Family, please visit www.gallagherfuneralhome.com

Share Your Memory of
Francis
Upload Your Memory View All Memories
Be the first to upload a memory!
Share A Memory
Send Flowers
Plant a Tree