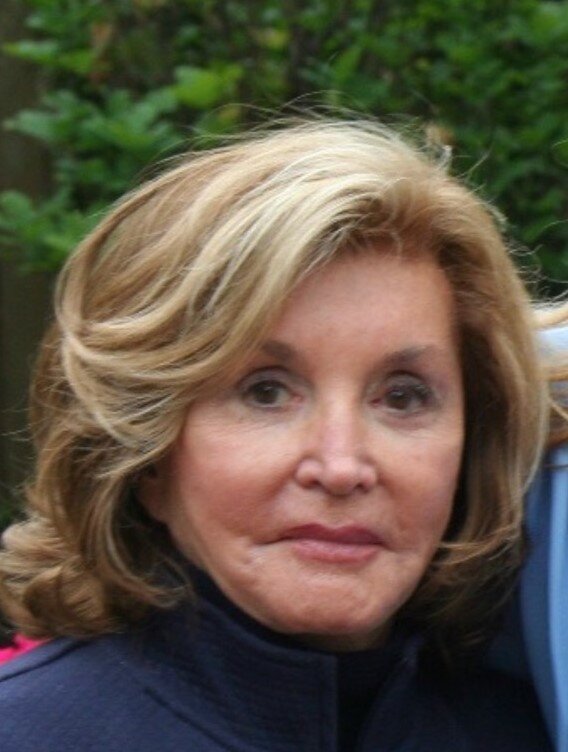 Suzanne Schulhofer Maguire August 27, 1934 (or 1938 if you asked her)– December 22, 2021 Rye, New York – Suzanne Maguire passed away peacefully on December 22, 2021, surrounded by her family at the age of 87. She was born August 27, 1934, in Durham, North Carolina and adopted by Sidney Schulhofer. She grew up at Westchester Country Club in Rye, NY where she resided until her death. Suzy graduated from Rosemary Hall, Greenwich CT in 1952 and attended Northwestern University until the cold winds of Chicago got the best of her. She moved to New York City where she worked in advertising at BBD&O until she wed Edward J Maguire Jr. on November 8, 1958. Together they had four children – Lisa, Michelle, Ted and Chris. In 1975, Suzy volunteered her time at the Medi-Quik Tennis Open and soon returned to the workforce full time travelling with the Avon Futures Circuit in 1977. The following year, she began her 27-year career with the USTA, facilitating the move from the West Side Tennis Club to the new USTA National Tennis Center in Flushing Meadows, Queens.

In 1980, Suzy became the Director of Marketing for the US Open and she is still best known for having negotiated the US Open’s first million-dollar sponsorship. In 1981, she realized a dream to work on Davis Cup Tennis for the next 11 years. Some of her fondest memories were of traveling for Davis Cup with team captain Arthur Ashe and “her boys”, Andre Agassi, Pete Sampras, John McEnroe, Jimmy Connors and so many others. The culmination of Suzy’s career came in 2006 when she was honored to be inducted into the Eastern Tennis Hall of Fame for her significant contributions to tennis. All her children and grandchildren have special memories of great times spent together with her in Nantucket, a place she loved dearly.

Suzy was preceded in death by her father, Sidney. She is survived by her children Lisa Foley (Donald), Michelle Twibell (Roger), Ted Maguire and Chris Maguire (Veronica). Suzy is also survived by her ten grandchildren, who she would insist we list by name: Tyler Foley, Taylor Twibell Havens, Conor Twibell, Sean Foley, Morgan Twibell, Teddy Maguire, Dillon Foley, Ryan Maguire, Hailey Maguire, Casey Maguire and the light of her life these last 2 ½ years, her two great grandchildren Jack Maguire Havens and Lily Rye Havens. A memorial Mass to celebrate Suzy’s life will be held in Rye, NY at a later date. In lieu of flowers, please consider a donation to San Miguel Academy, 245 Renwick St, Newburgh, NY 12550, or a charity of your choice.

A Memorial Tree was planted for Suzanne
We are deeply sorry for your loss ~ the staff at Thomas M. Gallagher Funeral Home
Join in honoring their life - plant a memorial tree

Share Your Memory of
Suzanne
Upload Your Memory View All Memories
Be the first to upload a memory!
Share A Memory
Plant a Tree