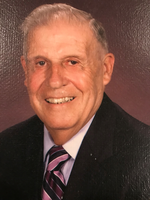 James W. (Jim) Cocolis, a lifelong resident of Stamford passed peacefully on January 13, 2021 with his family by his side.  He was 88. Born March 1, 1932 he was the son of William and Helen Cocolis.
Jim was a graduate of Stamford High School and the University of Connecticut.  He served his country with the US Army in Army Intelligence.
Jim was a lifelong member of the Church of the Archangels serving many years on the Parish Council.  He was a longtime member of the Order of AHEPA and of the State Street Debating Society.
Jim and his family were the longtime owners of the Halfway House Restaurant in Darien and he served a term as the President of the Connecticut Restaurant Association.  Jim ended his career working for 17 years at Robinson & Cole from where he retired in 2004.
Jim devoted his life to his family, friends and church.  He was known for his kindness and empathy toward those he loved.
Jim is survived by his daughter, Elaine Grant, and his beloved granddaughters, Katie and Caroline Grant who he treasured.  He was predeceased by his wife Margaret Cocolis who was the love of his life and his sisters, Jean Mulkerin and Margot Kalaizes.
In lieu of flowers, donations may be made to the Church of the Archangels in Stamford.
Services for Jim will be private but may be watched live on Tuesday, January 19th at 10:50am   on: https://archangelsgoc.org/watch-live/   Arrangements are under the direction of Thomas M. Gallagher Funeral Home. To send condolences to the family, please visit www.gallagherfuneralhome.com