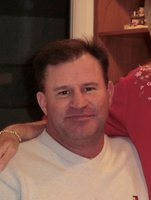 Harold A. Bonvenuto III July 25, 1970 - June 1, 2020 Harold A. Bonvenuto III, 49, passed away suddenly on Monday, June 1, 2020. He was born on July 25, 1970 at Greenwich Hospital. He was the beloved son of Barbara and the late Harold Bonvenuto, Jr. He is survived by his son James Anthony Bonvenuto, his mother and his sister, Kimberly of Florida, and sister Lori Carrillo and his brother Michael Bonvenuto of California. He is also survived by his Aunt Lucy Allen and Stuart Allen of Florida, and his Uncle Richard Barnes of Florida, and three cousins, Danielle Barnes of Connecticut and second cousins, Madison and Amber McCulloch, Patricia Alleva of Connecticut and second cousins Dominic and Anthony Alleva, and Laura Radisic of New Jersey and second cousins Becca, Caela and Lexi Radisic, and his beloved dog, Charlie He was predeceased by his father, maternal grandparents, Lucy and Samuel Austen and paternal grandparents, Harold and Marie Bonvenuto, and also his Aunt Elizabeth (Austen) Barnes. Harold enjoyed all winter sports and loved a good snowstorm. It wasn't even until recently that he considered moving to Florida to be with his family. He was loved by everyone who knew him and was one of the kindest souls on this earth. Due to the current pandemic services will be scheduled at a later date and arrangements will be handled by Thomas M. Gallagher Funeral Home, (203) 359-9999; for further information and to send condolences, please visit gallagherfuneralhome.com.