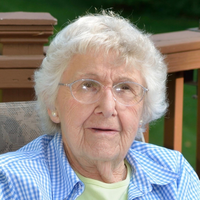 Agnes Sullivan Benison passed away on Christmas Day after a short illness. She was predeceased by her husband of 62 years, John Edward Benison. She leaves behind her daughter Margaret E. Benison of Stamford and five sons: Martin and Lauren Kolb Benison of Reading, MA, Edward and Lisa Greenwald Benison of Wilton, CT, Brian and Kathryn Lynch Benison of Springfield, VA, William Benison of Stamford, CT and Thomas Benison and Christina Ricarte of Greenwich, CT. She was predeceased by her eldest son John Francis Benison and her three siblings Mary Sullivan Schlegel, Jack Sullivan and Robert Sullivan. She was a lifelong Stamford resident, born here on February 15, 1927 to Nellie and John Sullivan, the third of their 4 children. After graduation she worked for several years at Machlett Laboratories in the Springdale area. On a blind date she met John Benison, who had recently arrived in Stamford from Worcester, MA. They were married on April 14, 1956. She was an active parishioner at St. Cecilia’s for many years. She was also active in the Stamford Catholic High School PTA and her women’s club. She was the central pillar of her family, magically ready with her famous brownies and apple pie. She loved the water and Cove Island. In her children’s early years, she would arrive with her sister and 9 children and associated PB&Js and grape juice. She went there for a walk the last time just a few months ago. Her ten grandchildren were the joys her life, Brian and his wife Ji Jie, Jennifer, Kyle, Megan, Amy, Devin, Derek, Austin, Isabel and Owen. She leaves many nieces, nephews, grandnieces and grandnephews on both Sullivan and Benison sides of her family. Her two oldest nephews, Frank Schlegel and Keith Schlegel, spent many a day with her children as an extension of the immediate family. In lieu of flowers the family requests donations in her name to the Myocarditis Foundation (myocarditisfoundation.org) or the Mary Beth Benison Foundation (mbbloves.org). Visitation will be held from 2-6 PM on Sunday, December 29, 2019 at Thomas M. Gallagher Funeral Home 453 Shippan Ave Stamford, CT (203)-359-9999. A Mass of Christian Burial will be held at 10:30 AM On Monday, December 30, 2019 at Holy Spirit Church 403 Scofieldtown Road Stamford, CT. Interment will follow at St John Cemetery, Darien, CT. To send on-line condolences to the family, please visit www.gallagherfuneralhome.com